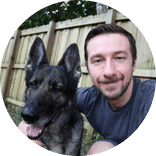 I grew up in a small, rural, Northern American town with a population of approximately 750 people. It’s fair to say computers were not a popular profession there.

I remember going through the checkout line with my parents at the grocery store and seeing stacks of CDs with “AOL” printed on the front. I didn’t know exactly what it was at the time except that the cover promised “hundreds” of hours of free internet.

These were the days of visiting a website, watching on image “paint” across the screen as it loaded for 30 seconds…then you realized it was the wrong site and had to click the back button after waiting all that time.

It was also the time when you didn’t instinctively go to Google when you needed to find something. Instead, you checked AltaVista, Yahoo!, Ask Jeeves, and Dogpile.

I went to college for 4 years where I learned some more about computers. I can honestly say I learned more about computers outside of class than in class. My first big step into internet privacy was when my friend and I deleted our Facebook accounts Senior year of college. While it was “the” place to be online back then, we thought differently.

Once I graduated, I applied to any place warm that had tech jobs (Florida, Texas, and California). A company in Florida was the first one to send me an offer, so I left the cold and headed to the heat. Since the move, I’ve spent the past 10 years in the computer security field. From a Linux Systems Administrator managing over 1,000 Linux servers for a hosting company – to protecting websites you use every day at the world’s largest DDoS/CDN/Web Security provider(s).

Since then, the people I’ve met, the information I’ve learned, and the jobs I’ve worked have solidified my beliefs on the subject. I have been far from perfect about it, but the goal isn’t to be perfect (unless you’re Edward Snowden). The goal is to make it so you’re not the easy target and someone else is.

Like the Pareto Principle states, 80% of the results come from 20% of the work. Work to get 80% of the way there as quickly as possible, and the remaining 20% you can work on in the coming years.

If you have any questions, comments, or just want to say hi, feel free to reach out.